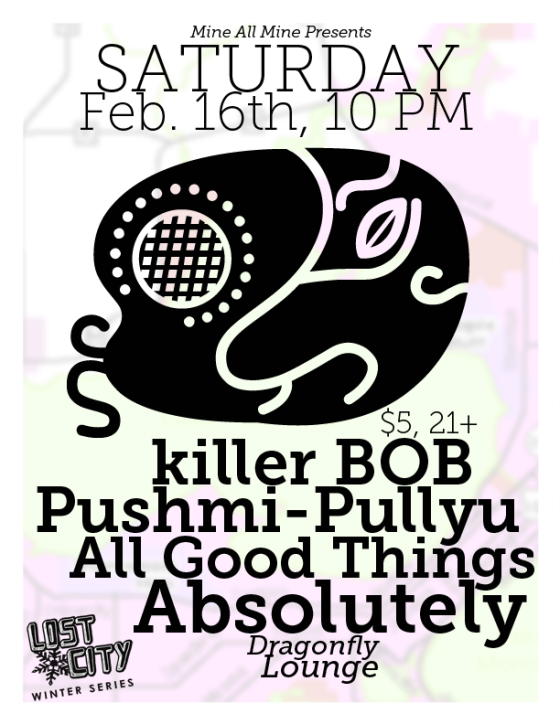 Tonight (Saturday, February 16th) is the second of two entries this weekend in our Lost City Winter Series at the Dragonfly Lounge.  And it’s a packed one at that!  Two excellent traveling bands will tear it up, including Milwaukee’s Absolutely and and Brooklyn-based killer BOB.  Representing Madison is All Good Things and Pushmi-Pullyu.  Read on below for a preview of the things to come!

It’s hard for me to talk fairly about Pushmi-Pullyu, because I’m in the band.  So, let’s get this out of the way right off the bat.  I like to say we make textural rock, but there are elements ranging from pop to blues in there, too.  This is our first show in quite some time, and hopefully the last before our album “Never Love A Stranger” comes out.  We’d love to see you there!

Milwaukee’s Absolutely know how and when to keep it simple.  On their recent release “Amp or Sandman EP,” the band combines danceable and satisfying tunes with relaxed grooves.  The result is pretty damn nice, teasing at what Absolutely will come up with next.  Hopefully another full-length of material of this quality is on the way.  For now, you can listen to “Amp or Sandman” (above), or 2011’s notably heavier “Learns to Love Mistakes.”

killer BOB is a band I’m particularly excited to see tonight.  Traveling from Brooklyn, the group makes noisy experimental rock oddly fitting of the creepy-ass cover for their album “fear may be a builder.”  If killer BOB’s live show is anything like the album, get stoked.  SIDE NOTE: Two bands with saxophones tonight?

All Good Things is the solo monicker of Milwaukee/Madison artist John Petty, who will be playing noticeably lighter material than the other acts tonight.  Petty takes the guy-with-a-guitar image and spices it up by experimenting with less-than-natural sounds.  If his album “Robotik Folk” is any indication, you can expect to hear traditionally structured folk songs held up with arpeggiators.