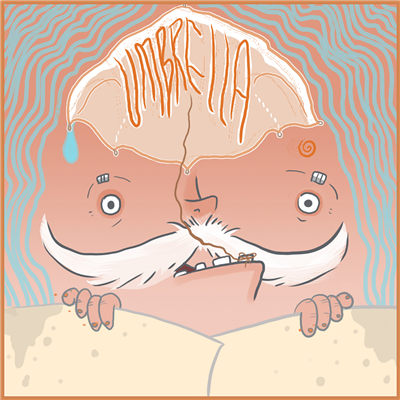 Joe Ludwig may not be a name that a lot of you know, but if you follow Mine All Mine Records, you’ve seen his work.  Joe graciously donated the art you see above for our Umbrella compilation, which was sold to raise money for SlaveFree Madison back in December.  He also created the artwork for the poster, and soon, his work will be featured on the cover of Fambly Fun!’s new album, The Machine.  Our resident interviewer Ben Schapiro sat down with Joe earlier this year.  Read the full interview below, and look for more of Joe’s work soon.

MAM: So, where did your art career begin?

JL: Well I’ve always been drawing ever since I can remember. In high school I took as many art classes as I could, not only because it’s the only thing I considered myself good at, but because it was one of the only subjects that interested me. I’m at MATC right now, and I really just started doing commission and design work. I’ve always wanted a ‘home’ for design where I have a steady amount of work to do and pieces that I’m constantly assigned. So far Mine All Mine Records feels like that place, because John Praw has asked me to do a number of pieces after I did the album art for the Umbrella festival.

MAM: And where is your career, now?

JL: Right now I’m doing a number of illustrations and designs for friends and people who have asked, like John and Corey from Mine All Mine. It’s not completely serious or full time since most of my focus is on school right now, but I enjoy doing it and I hope it helps them in some way. I’m going to MATC in Milwaukee for computer animation. One of my instructors used to work for Disney so it’s really nice learning from someone who is familiar with the animation industry. Illustration is what I like to do in my free time for fun and for a break from animating.

MAM: Who are your artistic influences?

JL: Most of my artistic influence comes from films, actually. Live action and animation. All Disney films, Pixar, Pirates of the Caribbean and especially Indiana Jones! As for other illustrators or artists I’d have to say Dr. Seuss and Lord of the Rings illustrator Alan Lee. There’s something about the fantasy pieces those two have made that touch me in a way and inspire me to open my mind and just create as much as possible.

MAM: What were you thinking when you made the Umbrella cover art?

JL: Most of the time I don’t sit and think about a concept before drawing. I’ve found the easiest way for me to loosen up and create is by drawing whatever comes to mind and think of a backstory afterwards, and make necessary changes to the design once I have a story or idea I like. In a way it’s like a ready, fire, aim way of working.

MAM: Is this your first album artwork?

JL: Yes, and I felt the pressure. I knew people would be seeing this so I didn’t want to put out a half-assed piece that I wasn’t proud of. My brother Sam who’s actually in Fambly Fun! gave me a copy of the printed album package that they were giving away at the Umbrella festival. It ended up looking a lot cooler than I had expected and I’m happy with the way things turned out.

MAM: What is your favorite medium to work with?

JL: I used to use straight up bic style pens and Sakura microns on paper but recently I’ve been doing nothing but digital illustrations in Photoshop. No scanned line art, just stylus on a tablet and going for it in Photoshop. It’s fun playing with color. Infinite color with no mess or cleanup. When I’m animating I use Maya for 3D and Toon Boom Studio for 2D.

MAM: Embrace your ego for a moment.  How would you describe your style?

JL: I’d say it’s a mix of the whimsical and the straight up stupid. Why would this guy have an umbrella tied to his big front tooth? I get a kick out of designing these odd things that I think nobody will laugh at and/or understand.

MAM: What’s your art-making process usually like?  Is music involved?

JL: I think music is mostly involved in the coloring and busywork process. I can listen to my iTunes library on shuffle at that point. When I’m in the actual creation process I need something that takes me away like a film score or something that has no vocals for me to sing along to. If there’s singing then I start singing along and lose focus on creating.

MAM: Tell us about some of your future artistic endeavors.

JL: Well ultimately I’d like to work for some kind of animation studio as an animator or a texture artist. Walt Disney Animation studios or Pixar are on the top of my list of where I’d like to work. I’d also give anything to be given the opportunity to write and illustrate my own children’s book.

MAM: Is your art on display anywhere?

JL: I’ve got some pieces up on deviantART.