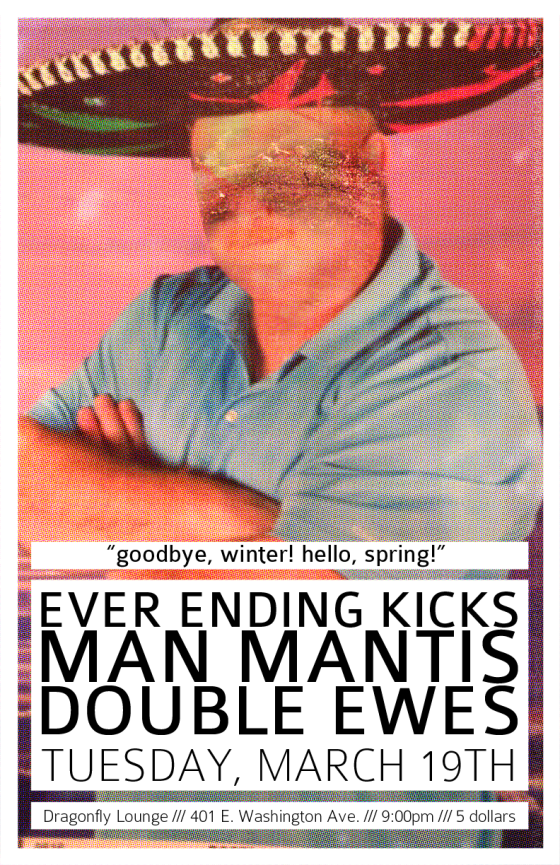 Can you believe it?  Today, March 19th, is the last day of winter!  Maybe it doesn’t feel like it, but I think it’s okay to celebrate the coming of the Vernal Equinox anyway.

Tonight, we’ll do exactly that in our 9th and final Lost City Winter Series show.  While I love all of the artists that have come through this wonderful winter shindig, I am admittedly more excited about this show than any other so far.  We’ve got Madison-favorites Man Mantis and Double Ewes, as well as Paul A. Benson (of Mt. Eerie, LAKE, etc) performing as Ever Ending Kicks.

Read on below for a taste of what’s to come.  And thanks for sticking with us!

Double Ewes make poppy experimental sounds in southern Wisconsin.  My few experiences with the band have been great.  Their electronics are mixed with the right blend of organic elements to create something rich and honest.  These are the kind of electronics you make with a generator in the woods.  Listen to Caravilla above, and if you like what you hear, snag a copy of their limited edition cassette, featuring Caravilla, Debut EP and bonus material.

Making his way from Ancortes, Washington, Ever Ending Kicks is the solo project of Mt. Eerie‘s Paul A. Benson.  You may recognize Paul from projects like LAKE, Motorbikes and more.  Like Double Ewes mentioned above, Ever Ending Kicks is a mix of decidedly organic electronics, but in a folkier, perhaps more ambient sense.  His recently released tape, Weird Priorities, is filled with a variety of outtakes and demos that deserve to be played when you’re alone in the car.  And it’s awesome.

Man Mantis is the shit.  That should be all I need to say, but I’ll elaborate.  Man Mantis (aka Mitch Pond) is half man, half mantis and all about the beat.  His 2011 album Cities Without Houses introduced a ton of people to what Man Mantis is capable of, and his work since has only pushed that level of polish farther.  Toward the end of last year, Man Mantis put out some incredibly promising work with Anticon co-founder Sole, which you can hear on SoundCloud.  Do not miss Man Mantis.